Which is Better for PCBs — Potting or Conformal Coating?

For protecting a PCB, Rush PCB offers a few options—potting with encapsulation resins or conformal coatings. For both, we use organic polymers to provide the necessary chemical and thermal resistance, along with the inevitable electrical insulation to the PCB assembly. Although there are several similarities between the two, there are many differences as well. It is necessary to understand the differences between conformal coatings and encapsulation resins and their effects on the PCB assembly, to use them where they will offer maximum benefit. 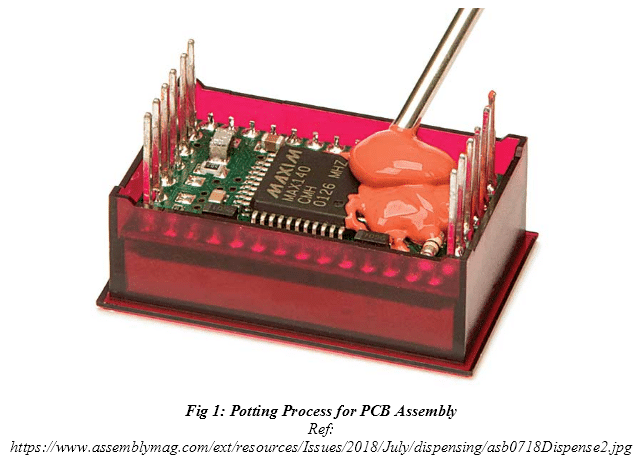 Potting, encapsulation, or embedment protects the PCB assembly from its immediate surrounding environment. Potting adds a shell that encases the board, providing thermal management to the electronics it covers. For potting, it is necessary to place the PCB assembly within a suitable open box, and immerse the PCB and components in a liquid compound that the operator pours into the box. Once the liquid hardens, it encases the PCB assembly, making the box, and the hardened compound a part of the final product. 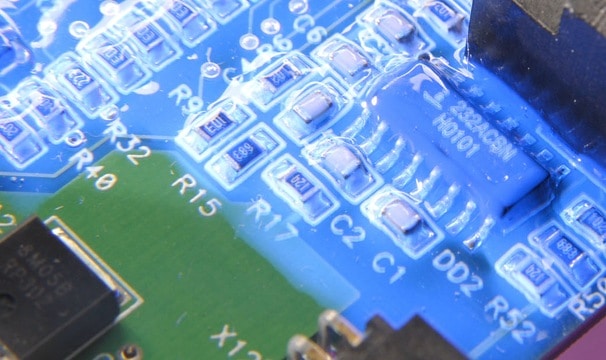 Conformal coatings are a protective, dielectric coating that manufacturers add on to a PCB assembly to provide an electrically non-conductive layer. As the name implies, the coating adheres to the PCB and components conforming to their outer shape. The layer adds significantly to the protection without increasing the weight or thickness of the PCB assembly.

Both potting and conformal coating aim for the same goal—to prevent damage to the PCB assembly from vibrations or effects of a harsh environment.

Both extend the life of the PCB assembly by shielding the components.

Both methods, when used in the right situation, can be equally effective, but they protect the PCB assembly in different ways.

Encapsulation of potting seals the PCB assembly with a thick layer of epoxy, adding substantial protection against chemical exposure and physical shock. Apart from this, it provides excellent electrical insulation. When dark colored, the epoxy does not allow visibility to the board or components underneath. As the applicator mixes a hardener with the resin before potting, the resin cures to form a cross-linked polymer or epoxy.

A conformal coating is a non-conducting protective dielectric layer that protects the board and components from corrosion, moisture, fungus, and salt spray. The thin film is lightweight, and does not have any dimensional effect on the PCB assembly, and does not add stress to the components. Traditional application is usually via a single-component spray, which makes conformal coating easy and versatile, offering flexible options.

Newer types of conformal coatings use two-part processes. To provide flexibility along with protection, the new types use polyurethane. The absence of solvents reduces concerns about VOCs or volatile organic compounds, typically present in several single-component causing adverse effects on the environment and people. However, awareness of the effects of VOCs is causing manufacturers to reduce these compounds in their coatings.

Which is Better for PCBs

For the best protection of the PCB assembly, several different factors need consideration. The most significant factor being environmental, consider whether the PCB assembly will face exposure to the following:

Extreme Temperatures: Choose the resin based on the temperature excursion. According to Rush PCB, resins behave differently under temperature extremes and rate of change. While mixing with its hardener, resins usually produce a huge amount of heat. The generated heat could damage the PCB and its components.

Moisture, Humidity, or Wetting: All conformal coatings are not the same, some being less waterproof than others are. Resins are usually waterproof, but the method of application and coating thickness may differ, and coatings with inadequate thickness may allow water ingress.

Vibration or Physical Shock: The presence of epoxy can help to absorb and spread the effect of vibration and physical shock, thereby eliminating the damage to the PCB assembly.

Chemical Exposure: Both epoxy and coatings provide exceptional protection to PCB and components from chemical exposure, saltwater spray, and immersion.

Acrylic Resins: Popular, fungus resistant, can dry in room temperature within 30 minutes, excellent electrical and physical properties, can withstand up to 125 ºC.

Silicones: Good for high-temperature environments up to 200 ºC. Good resistance to humidity and corrosion, but less resistant to abrasion and solvents. Thicker layers can promote vibration damping.

Covering the PCB assembly with potting or conformal coatings is a complex process and has several variables such as effectiveness, turnaround time, and cost. Rush PCB has experts that help select the right protection for a specific project, timeline, and budget.