ESD or ElectroStatic Discharge damages both printed circuit boards (PCB) and electronic components. This happens when there is an accumulation of positive or negative charges on insulators or unconnected conductors. The amount of charge accumulating depends on the stored capacitance on the insulator or conductor with respect to nearby objects having a corresponding opposite charge. The charge is static as it is unable to equalize itself or be transferred by electromotive force, unless there is a decrease in the value of the capacitance between the objects, or there is a path for its discharge. The presence of a conducting path allows the charge to either bleed away slowly, or to discharge quickly depending on the resistance the path offers. The phenomenon of quick discharge, also called ESD, causes the most damage. 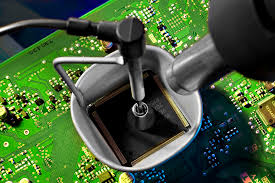 All materials can be sources of static electricity. However, some materials are susceptible to positive changes, while others to negative. For instance, positive charges accumulate predominantly on animal fur or human skin, while negative charges are more commonly found on synthetic material such as plastic cups and Styrofoam. The amount of electrostatic charge accumulating on an item depends on its capacity of storing it. For instance, the human body has a capacity of about 250 picofarads. This translates to a stored charge with an electromotive force of 25 kV.

Simply put, ESD is a tiny amount of lightning, similar to what happens during thunderstorms, only in a miniature form. According to the laws of physics, the electromotive force causes a massive amount of current flow through a path offering the lowest resistance. In most cases, the discharging current travels to ground via the metal chassis or frame.

For instance, while assembling a PCB, the electric charge stored in the operator’s body could discharge through the electronic circuitry via the grounded holder or metal chassis. While discharging, the ESD current may follow several available paths to reach the ground.

If the path available to the current is through the PN junction inside an integrated circuit, the current will burn through leaving visible holes. The burn comes from the I2R loss, where, even though the resistance (R) is low, the high electromotive force causes a high level of current (I) flow. The material is unable to dissipate the massive heat generated, and as a result burn.

As the amount of heat generated depends on the current flow caused by the electromotive force, the amount of accumulated charge actually governs the amount of damage that takes place. Sometimes, one ESD discharge may not be enough to totally disrupt the device, but only weaken it, causing it to subsequently fail when stressed during normal operations. Even smaller discharges, but repeated over time, may degrade the internal structure of a device.

ESD has different ways of manifesting itself. Most commonly, it occurs when humans touch sensitive devices. According to extensive studies, the human body and certain clothing can store anything from 500 to 2,500 V of static electricity during a normal workday. We do not realize this as the level is below the threshold of human perception, but the level is far above the level that can cause damage to electronic components.

Apart from the human touch, there are other ways also that ESD can damage PCB assembly. Some of these are:

In the above scenarios, static charge may accumulate without your knowledge, and an ESD may occur without the PCB assembly actually coming in physical contact with the charged object.

Read More: Advantages of Using a Consultancy for Circuit Board Manufacturing

Damage to PCBs by ESD

When a PCB assembly comes close to any object that has a charge, there is a possibility of an ESD. This depends on the electromotive force between the two and the distance separating them, with the greatest chance of an ESD taking place when the two touch.

Although manufacturers build different protection mechanisms within ICs, ESD can as much as totally ruin an IC. This damage may be of two types—latent or catastrophic.

When a device suffers latent damage due to ESD, it may be partly degraded, and continue to run. However, the device becomes unreliable as its lifetime reduces, and its operational behavior affected.

A bare PCB may also suffer latent damage. For instance, there can be an electrical discharge from one neighboring track to another, if the latter is connected to ground. The discharge can char the top layer of the PCB insulation, causing a partially conducting path. This can affect the performance of the circuit after assembly.

Catastrophic damage occurs when the device is permanently damaged because of ESD. A performance test can usually detect such damage. As catastrophic damages are detected at early manufacturing stages, the effect is not as expensive as that from latent damages.

Designers can follow standard practices during design that help protect PCBs from ESD. These include:

ESD prevention by process should follow a company-wide awareness and training of personnel at all stages involving PCB and component handling and storage. At all stages proper grounding of personnel and equipment is essential to prevent any static electricity buildup. Personnel must wear anti-static overalls, shoes, caps, and always carry their wrist bands, which they should connect to ground before they touch any PCB assembly.

Metal workbenches must be grounded to the electrical earthing system, and have grounded anti-static mats on top. All anti-static material grounding, including grounding wires for wrist bands have a high value resistor in series. This allows static charge to drain away, but protects personnel from inadvertent electrical shocks. For more information and recommended practices on static electricity, refer to NFPA-77.

It is necessary to establish a process of periodic checking of the grounding system to ensure proper working. Ground wires of tables and wrist bands have a limited life period, and must be checked and replaced periodically. The top surface of anti-static mats tends to wear off and this reduces their effectiveness. They too must be replaced periodically once their surface and volume resistivity changes. Compounds are available for treatment of carpets and floors to reduce the buildup of static charges.

Use of synthetic material must be curbed, especially at incoming material inspection, storage bins and facilities, PCB assembly and testing stages, and during packing and dispatch.

Dry air supports creation of ions and accumulation of static charges, whereas humid air helps to dissipate them. Areas with air-conditioning must include humidifiers to keep the air from becoming too dry.

If the above is not feasible for the entire shop floor, it may be prudent to establish an ESD Protected Zone with clear identification and demarcation. By linking all surfaces to the ground, it is possible to keep all objects, people, and ESD sensitive devices at the same potential. The area should be accessed only by trained personnel, and a periodic checking system established as above.