What are Step Stencils?

With electronic equipment trending towards smaller and thinner form factors, engineers must use tiny Surface Mount Technology or SMT components on Printed Circuit Boards or PCBs. Most often, the board has a mix of fine pitch, medium-sized, and large SMT components. For effective assembly of such boards, Rush PCB recommends using step stencils.

What is a Stencil?

Assembling SMT components on a PCB requires depositing solder paste on pads on the board. The most optimum and accurate way of doing this is by using a stencil. A stencil is a thin sheet of steel with holes cut in it accurately matching pads on the PCB.

Thickness of the stencil and the area of the opening or aperture for a pad determines the volume of solder paste that the stencil deposits on the pad. The volume of solder paste on a pad is extremely important for proper soldering of a component. If the volume is low, soldering on the component may be inadequate. If the volume is high, excess solder may cause bridging with the neighboring pads. Rush PCB designs stencils with optimum aperture and thickness for effective solder deposit.

Even when the stencil has an optimum thickness and aperture, it may not be adequate for a board with a mix of SMT components with different footprints. For instance, ceramic BGAs need a high melting point during the soldering process, as the ceramic body absorbs a lot of heat and prevents solder balls from melting at normal reflow temperatures. For this, it is necessary to print higher volumes of solder paste on the CBGA pads, which requires a stencil thickness of 0.18-0.2 mm.

Depositing solder paste effectively on a board that contains CBGA, QFP, and 0402 SMT components requires a step stencil—a combination of a basic 0.127 mm thick stencil with 0.2 mm thick areas for the CBGA. For good solder paste release, Rush PCB recommends final electropolishing for the stencil.

What is Step Stencil? 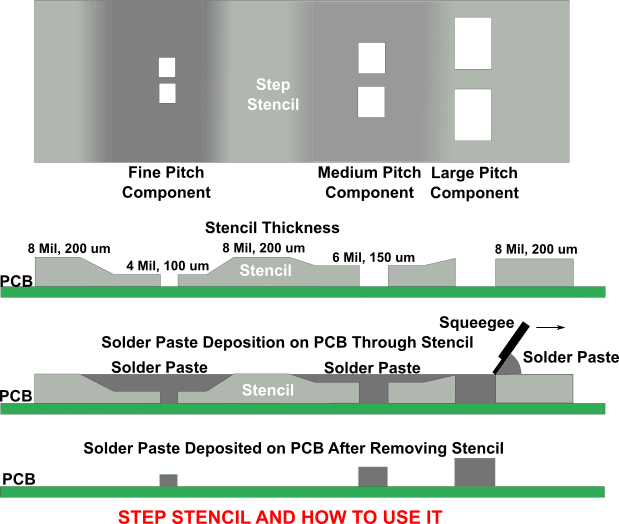 Two types of step stencil are common—step-up and step-down.

Manufacturers use one of three technologies for fabricating step stencils. They use:

Photo-Chemical Etching Technology: This is the primary method for fabricating step stencils. The fabricator applies a photographic process for applying resist on areas of the stencil that will not undergo etching. Then they spray an etchant onto the stencil surface to remove material until they achieve the desired thickness.

Micro-Machining Technology: The fabricator attaches the basic stencil sheet to a cooled vacuum plate on a milling machine. They use the CNC based milling machine to remove very small amounts of material at a time, until they have achieved the desired thickness. They mount the stepped foil on a frame and use a laser beam to cut the apertures.

Some of the benefits of using step stencils include:

Capabilities
QUICK LINKS
GET IN TOUCH
Importance of PCBs and PCB DesignUncategorized
To Fill or Not to Fill Vias?Uncategorized