Eminent PCB fabricators such as Rush PCB Inc. use different types of prepregs and laminates for their PCBs. The manufacturers of these materials offer a number of fiberglass fabric styles. They base their selection on the thickness that the finished laminate or printed circuit board will take. It also depends on the amount of resin that will be present for filling and bonding. They make the specific choice depending not only on building up the thickness, but also on secondary properties such as cost, dimensional stability, CTE control, dielectric constant, and stiffness.

Manufacturers begin with fiberglass fabric on a warp beam that contains several thousands of individual strands of yarn rolled over a master beam. These yarns constitute the machine direction the fabric will take, which is also called the warp direction. They then slash the warp yarns, or run them through a solution of lubricants or sizing agents and this protects them from damage during the weaving process.

The actual weaving process begins by mounting the warp beam on the back of a loom, with the fill yarns being inserted as the warp yarns pass through from the back of the loom to its front. Earlier, there were the Draper looms, where a wooden shuttle with the fill yarn would proceed back and forth from one side of the loom to another to insert the fill yarns, while the alternating warp yarns moved up and down in a mechanical frame as it created the traditional plain weave, resulting in a woven or drapered edge.

The newer looms operate on air or water jet, where the jet carries the fill yarns across the loom. Cutting off the fill yarns individually leaves a fringed edge. In the modern looms, a single warp beam can contain several thousand meters of warp yarns that represent as much as a single loom can weave in a week. 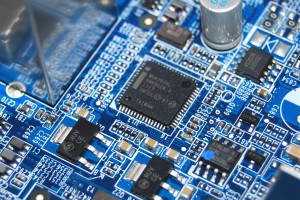 After the weaving is over, the electrical grade glasses need to be scoured with an aggressive water rinse, which removes excess sizing from the warp yarns. To remove the balance, they are then heated in an oven at elevated temperatures for a long period. The weaver then treats the fabric with finishing agents such as organosilane that provides a surface that resin systems can wet and bond.

Glass intended for polyimide manufacturing requires application of a high temperature finish such as amino-silanes. This makes the bonds tough enough to withstand the use conditions the polyimide will go through.

Although the finish on the fiberglass fabric is only a very tiny amount of material, it vitally affects the way resin will wet the surface during the prepregging process. Poor scouring, heat cleaning, or inadequate silane treatment can leave the prepreg with repellent streaks or spots that often show up when heated. Glass weavers offer a variety of finishes, and the correct choice of finish for each resin determines its performance critically.

Several epoxy resin systems are green in color. This started with fiberglass finishes that had chromium chemistry as their base with the trade name of Volan, which produced a green finish. Now, very few manufacturers use Volan, and use organosilanes instead. However, the complaints from end users about the change in appearance of their product have forced the suppliers to start dying their FR-4 products green to make them look same as before. That explains the reason for green being so common a color for epoxy printed circuit boards.

Smooth resin rich surfaces offer a better fill for internal etched copper patterns. This is often a result of lightweight fabrics with high resin content. Using heavier fabrics result in lower cost, while offering enhanced dimensional stability and permit building up greater thickness at lower cost per mil. However, the use of heavier fabrics usually affects drilling characteristics and surface smoothness. Although thicker and heavier fabrics result in low-cost rigid laminates, they can deflect small drill bits causing them to break.

Warp, Fill, and Direction of Weave

For instance, for a laminate measuring 36 x 48 inches, the warp is normally parallel to the longer dimension. Unless the customer makes a special request, or it is necessary to cut otherwise, the warp usually follows the longest dimension of a piece of cut panelized or prepreg laminate. When warp is not along the longest dimension, or for square panels, the fabricator marks the warp direction clearly by an arrow on the package or on the material.

Also Read;   PCB Testing: Why is it Important?

Under normal handling conditions, warp yarns are under tension and remain straight, while fill yarns should remain at right angles to them. However, for some reason, if some of the fill yarns in the fabric move away from their 90° position, the laminate or multilayer may develop a ripple or twist. For the fabricator, it is very important to have raw fabric with undistorted yarns. However, even for fabric with undistorted yarns, warpage can still occur unless the laminator takes care to align the yarns in one sheet of prepreg relative to another.

It is not easy to specify or measure the dielectric constant of the laminate, as it depends not only on its intrinsic properties, but also on the method of testing, conditioning of the sample before and during the test, and the test frequency. Moreover, dielectric constant tends to vary with temperature.

At Rush PCB Inc., we determine the characteristic impedance of a PCB based on the laminate thickness, its dielectric constant, and the height and width of the etched line height. Impedance matching and control are critical to linked functional modules when dealing with high-speed devices and designs.

Recent Posts
Follow us on
Chat With Us
Help Desk Software
Capabilities
QUICK LINKS
GET IN TOUCH
Factors Affecting the Longevity of Copper BondPCB
What is Vapor Phase Reflow Soldering?PCB, PCB Assembly and component, PCB Manufacturing