This time, we will introduce two methods for creating wiring patterns. When using copper-clad laminates (CCL), the “subtractive method” is used to combine the film and photoresist, and the wiring is formed by etching. Let’s understand that wiring that is too thin invites failure. The other “additive method” is characterized by its ability to draw patterns with high precision.

Determine the Width of the Wire

When designing a board, the first important design item to do is “determining the wiring line width of the board”.

Let’s assume that we can stably realize extremely thin wiring widths and wiring spacings of several μm. Then, in most boards, if there are two wiring layers, all the nets can be routed.

There is a minimum line width and line spacing for board manufacturing yield and board reliability. If you try to make a particularly narrow wiring width and wiring spacing, the price will be much higher than the general board price. 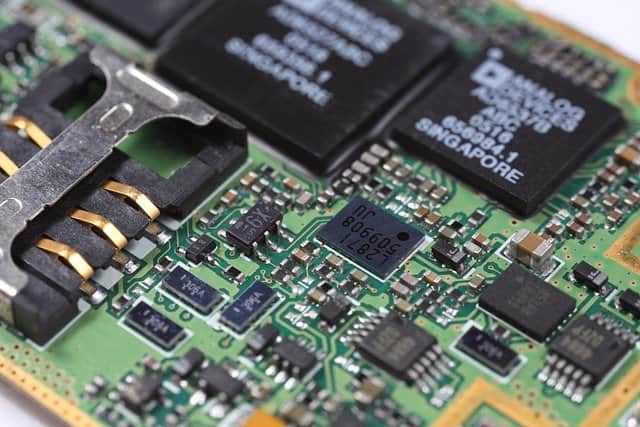 Two Ways to Make the Wiring Pattern of the Board

There are two methods for fabricating wiring patterns on boards.

The first method is the “subtractive method”. This is a method of manufacturing a wiring pattern by using a substrate that has been covered with copper foil in advance and removing the copper foil from areas other than the wiring area. The substrate used in this case is called “Copper Clad Laminate (CCL)”. “Subtractive” means subtraction.

First, let me explain the subtractive method. In this method, the part to be left as the wiring pattern is first masked with a material that is resistant to corrosive liquid (etching liquid). After that, the unmasked portion of the copper foil is corroded and etched with a copper-dissolving chemical such as a ferric chloride solution. Finally, the mask and the residue of the melt are washed off, and the wiring pattern is formed.

There are multiple methods of masking. In the past, a method called silk screen printing was used, in which ink or paint was masked onto the copper foil to be left as the wiring pattern. This method is called a printed circuit board because the wiring pattern is printed.

However, this silkscreen printing has its limitations. In addition to poor dimensional accuracy due to printing misalignment, disconnection due to faint or missing printing on fine wiring, and uneven wiring width. For this reason, it cannot be used for fine pattern boards with narrow wiring widths.

For this reason, today, film drawing machines are widely used to handle finer wiring, and masking is done with photoresist instead of screen printing.

In addition to this, there is also a direct exposure method that draws a wiring pattern by irradiating ultraviolet rays on a photoresist applied to a substrate instead of exposure with a drawing film.

Although the exposure time per substrate is not short in the direct exposure method, this method is used for small-lot production such as prototype substrates because it reduces the cost of creating drawing film.

Pattern creation using mask film and the photoresist is the same method as IC pattern creation, and substrate patterns can be created with extremely high accuracy.

The subtractive method has high drawing precision, but due to the limitations of etching technology, it is necessary to take considerably large wiring widths and wiring intervals. At present, the minimum value for each is about 100 μm, and even if it is small, a value of several tens of μm or more is required.

However, the copper foil that has bitten into these dents may not be completely peeled off during etching and may exist.

Even if a small amount of copper foil remains on a printed circuit board with wide wiring spacing, it does not pose a problem, but if the wiring spacing is narrow, it may cause potential isues as mentioned below.

For example, repeating ON/OFF of a signal causes a short circuit between wires, a phenomenon called tracking. The cause is minute impurities on the surface of the insulator. The remaining copper reduces a number called the comparative tracking factor (CTI) and increases the board’s failure rate over time.

There is another problem with tiny copper foils. The surface roughness of the copper foil for the anchor effect is about 5 to 10 μm, so this roughness remains in the dimensions of the base after etching.

For this reason, technology is being developed to smoothen the copper foil surface and bond the copper foil to the substrate without using the anchor effect to reduce the loss of high-speed signals and achieve finer circuits.

These are the characteristics of the subtractive method.

In contrast to the subtractive method, which shares the same basic technology, there are various techniques used in the additive method. Due to the difference in technology of each company, the limit and cost of fineness are also diversifying.

Combination of Subtractive and Additive Methods

Many build-up substrates are created using a combination of subtractive and additive methods.

In general multi-layer laminate boards, the required number of prepregs are sandwiched between single-sided or double-sided boards created by the subtractive method, and after they are laminated all at once, through-holes are drilled and the holes are plated with copper for conduction.

A build-up board is created by laminating wiring layers by the additive method on several layers of laminated boards created by the subtractive method in this way.

Use 3 Different Designs Depending on the Type of Wiring

When determining the wiring width and spacing, it is necessary to first consider the type of wiring. Here, we will divide it into three main elements.

If the wiring width and spacing are reduced, the number of signal lines that can be routed per unit area will increase, making it possible to reduce the board area and the number of wiring layers.

Conversely, if the value is high, the noise voltage that generates current noise such as crosstalk noise and electromagnetic noise will increase.

Why do we create a microstrip structure in printed circuit boards?

In order to give the wiring a stable characteristic impedance, we generally create a microstrip structure in which wide and stable wiring is applied to the layer adjacent to the signal wiring.

If it is necessary to control the impedance of the wiring on a multilayer board, the ground (G) and power (P) are used as inner plane layers, and the adjacent wiring layer is given a characteristic impedance to stabilize it.

The characteristic impedance of a trace depends on the permittivity and thickness of the dielectric that exists between the signal trace and the plane layer, and the width of the signal trace.

It is common to find the impedance wiring width using software that calculates the characteristic impedance of the wiring using these factors.

In addition to single-sided and double-sided boards, recently there are many cases where power supply lines are created with wiring even on multi-layer boards.

The IPC standard is an American standard that was established by the Institute for Printed Circuits (IPC) and has influenced standards around the world. Currently, the Association of Connecting Electronics Industries in the United States has enacted the IPC. There are many IPC standards such as design, manufacturing, and materials.

IPC-2152 requires that the wiring width be determined with consideration given to the heat generated by passing a large current through the board wiring.

Along with silver, copper used for circuit board wiring is one of the most conductive metals at room temperature, but it still has a small resistance component.

If the resistivity of the conductor is ρ (Ω/m), the cross-sectional area is S (m2), and the length is L (m), the wiring resistance R can be obtained by the following formula.

Using this formula to calculate the resistance of a wiring with a copper foil thickness of 35 µm, a pattern width of 1 mm, and a length of 100 mm at 30°C yields approximately 50 mΩ.

The resistance component of this wiring does not pose a major problem in general signal wiring, but it causes two problems in power wiring that carries large currents. One is the problem of voltage drop due to wiring, and the other is heat generation from wiring.

In order to allow a large current to flow through the wiring, it is necessary to reduce the DC resistance of the wiring.

The resistance R of the conducting wire is “R = ρ L/S” as introduced earlier.

Shorter wires can reduce voltage drop, but have no effect on wire heat generation (per unit length).

Even with the same wiring width, if a 70 μm copper foil is used, the cross-sectional area is doubled and the DC resistance of the wiring is halved. Then, the currently allowable value that can flow increases by √2 times.

This is because the heat generated from the wiring is proportional to the power consumption of the wiring (W = V x I = R x I^2). If R is halved, the limit on I is multiplied by √2. If you want to carry twice as much current, quadruple the cross-sectional area of ​​the conductor.

This is a guideline value that considers safety to some extent. Since the value varies greatly depending on the cooling and convection conditions of the atmosphere, use simulation software to improve accuracy.

This concludes the explanation of the subtractive method and the additive method. Each method has advantages and disadvantages. I would appreciate it if you could understand the difference and use it for future board production.

Capabilities
QUICK LINKS
GET IN TOUCH
What are FFC, BTB & Flying connectors and their role in PCB Boards?PCB Assembly and component