Keeping Things on the Level

Sometimes, in PCB assembly, it’s not the layout of the SMT PCB that creates issues, but the design of the part itself, or the plan for the part’s location, given its dimensions. We have to ask ourselves, sometimes, “What were they thinking?” 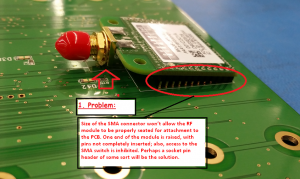 In this case, a customer’s BOM called for a part (an RF200 module with through-hole pins) to be mounted onto a PCB. At one end is a bulky SMA connector that due to its size exceeds the thickness of the module. The SMA connector faces inward on the PCB; it’s not mounted to hang over the edge. As a result, the SMA connector bottom side touches the board and props one end of it up; it doesn’t allow the module’s pins to be properly inserted into their corresponding PTH barrels on the board. One end of the SMA is pointing upward on an angle like a missile-launcher.

This is obviously not acceptable in circuit board assembly; not only is customer access to the connector compromised, but the module cannot be mounted in a planar fashion and having some of the pins fully inserted and some halfway out of the barrels, with one end of the module elevated, is certainly not acceptable.

Here at RUSH PCB Inc., the fix was relatively easy; we recommended that the customer allow us to use two (2) single-row socket pin adaptors to provide the standoff necessary to keep the SMA connector from touching the board while at the same time allowing easy and unobstructed access to the connector.

Two socket headers were used, corresponding to the module’s two rows of pins. Not only did this provide the needed standoff, without creating any other issues, but it also allowed the customer the potential for removing or replacing the module in the socket pin adaptor in the future without serious rework issues, since it’s a mechanical mounting. It’s also a robust electronic assembly connection in terms of strength and durability, and the module is completely planar with the surrounding PCB surface.