How to Effectively Place PCB Traces

As any PCB manufacturer knows, it is easy to fabricate a wide trace on a PCB. During fabrication, it is easy to etch long traces spaced away from other copper entities. Therefore, Rush PCB recommends making traces as wide as possible. For instance, when etching a 20-mil trace, it can tolerate greater metal loss, but a 2-mil trace is not so forgiving. However, designers like to define trace widths depending on the weight of the copper on the layer of the board. In general, if a layer must handle high currents and has greater copper thickness, etching traces of fine width on that layer may be impossible for the fabricator. 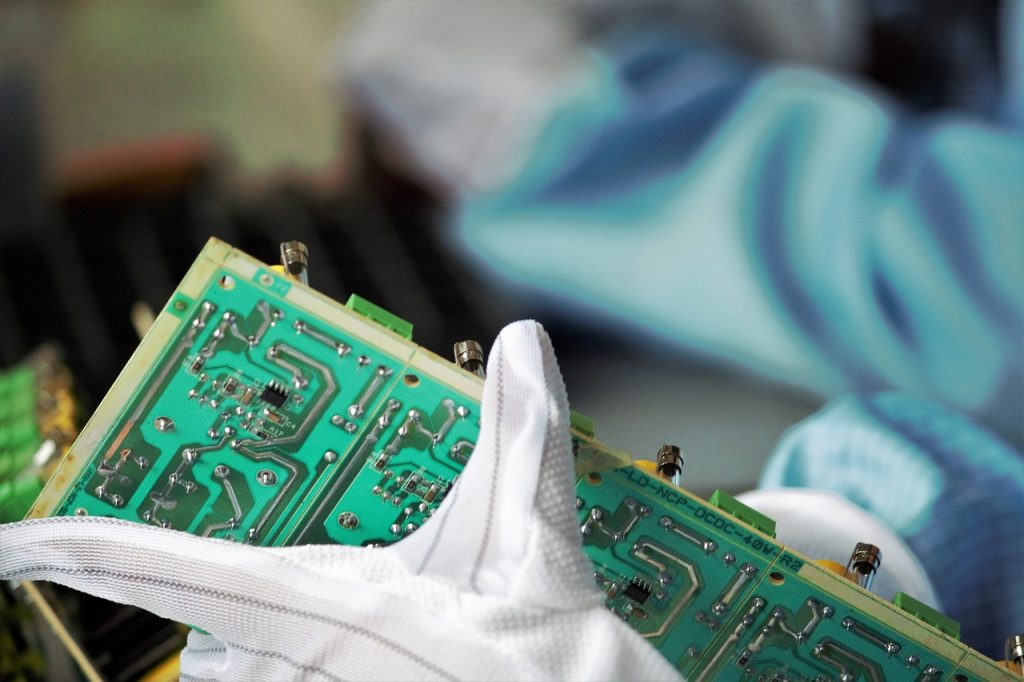 Wide traces can cause problems with component soldering during PCB assembly. Although it is customary to have wide traces or even copper pours for ground and power nets, these can act as a heat sink, leading to poor solder joints because of uneven heating and heat sinking. For instance, two-pin parts with one pin on a large trace and the other on a thin trace may become tomb-stoned during solder reflow, and may lift up on one end. This may force manual rework of the board. A large land of copper just under an BGA may also cause problems during soldering. Moreover, this type of problem is more difficult to notice as the body of the BGA hides it.

Rush PCB recommends using the right trace widths and spacing to avoid the potential problems above. PCB layout designers can set the power net trace widths in the constraint manager and in the design rules and constraints in their PCB CAD tool.

As is visible on a PCB, the layout designer can use several trace widths and spacings. In fact, the designer must manage the width and spacing not only for individual nets, but also for a group of nets or busses, and for ground and power nets. In addition, the designer must also use the appropriate vias necessary on these traces.

As not all nets can have the same values for width and spacing, so the designer must assign a single or one set of values to an individual net or group. Every PCB Design CAD tool has a design rules and constraints management system for handling such tasks.

Earlier, design rules and constraints had only a limited scope in PCB Design CAD tools. Now, they have evolved into a spread-sheet style interface, allowing the designer set up a variety of rules and constraints, such as assigning different trace widths to nets. There are separate settings for spacing, via assignments, and many more.

Such advanced constraint management systems in PCB Design CAD tools offer designers complete control over setting up the trace routing rules for their designs. Additionally, these systems also allow designers control other values like component spacing, signal tracing, and settings related to manufacturing such as for silkscreens and solder paste. The wide range of routing tools built into these software programs also improve the efficiency of the designer.

Routing traces on a simple printed circuit board is straightforward. Designers assign a default width and spacing to all traces except for power and ground connections, which had to be wider. Other wider traces, if necessary, designers could manually handle while routing them. However, with circuit board density growing more complicated, trace widths and spacing requirements became more involved.

Designers face ample challenges while routing dense circuit boards. To ease their task, Rush PCB provides some methods for successfully routing confirming to required rules and constraints. A given board may have some or all the following:

Designers use vias for transitioning traces between layers of a multi-layered PCB. In PCB CAD Design systems, designers must use an array of different via types and sizes for routing effectively. In general, there are three types of vias:

While through-hole vias are standard types that an operator creates by drilling through the board, drilled blind and buried vias only go partially through the board, starting and stopping on internal layers. Manufacturers use lasers to create micro-vias, and these are much smaller compared to mechanically drilled vias. Typically, micro-vias span only two layers of the board. Designers use micro-vias extensively for via-in-pad designs and in high-density interconnect designs, as they require thinner traces.

PCB trace widths, spacing, and vias affect the circuit board in many ways. Rush PCB recommends considering four major areas when deciding the values for width and spacing of traces.

Designers typically use a default value for trace widths and spacing for most digital routing on their circuit boards. However, they also require different sizes for some nets. Designers base such trace width calculations on configurations of the stackup of the board layers. For instance, designers prevent crosstalk and other problems with large spacing values for traces carrying high-speed signals.

The specific purpose of the circuitry may also decide the unique trace widths and spacing necessary for analog routing on a board. The designer must be careful when reducing the default trace width in constricted areas, and not extend it across the board. Also, the trace must not be so thin that fabrication is likely to compromise it, as it will then disrupt the signal integrity of the entire board.

A wider trace is easier to fabricate. The etching process has more pronounced effects on long and isolated traces. Therefore, the wider the trace is, the better it is for fabrication. A 20-mil trace can bear to lose more metal than a 2-mil trace can during etching. Also, the fabricator might find it impossible to etch very thin trace widths on a layer requiring greater copper weight and high current handling.

Soldering components effectively during PCB assembly depends on the width of the traces. A wide trace can act as a heat sink when prevent adequate melting of solder for a good connection. Two pin components like resistors, capacitors, and inductors can suffer tombstoning during reflow if one pin is on a wider trace. Large copper lands under BGA ICs can lead to problems during soldering.

PCB Design CAD systems have evolved to allow plenty of routing aids and tools. They provide many visual cues to show the best channels for manual routing. They employ heads up display to track routing constraints while routing. For manual routing, the designer can use options like push, shove, slide, and hug. Some systems offer a scribble routing feature, where the designer sketches the route manually, and let the automated engine do the actual routing of the trace.

Rush PCB recommends using one of the many PCB Design CAD systems available for effectively routing PCB traces. Modern systems offer a wealth of power features for routing circu8t boards so that the designer has complete control over the width and spacing of the traces on the PCB.