PCB design is a complex process typically requiring several considerations, sometimes with no single correct way of achieving a functional outcome. Engineers need an in-depth understanding of the printed circuit board (PCB) design process along with the knowledge of pros and cons of various options available to them for making the best design choice for achieving an optimum balance between functionality, usability, durability, and inevitably, within budget constraints.

Once the designer has outlined interconnect and major component positions, it is usual for them to place individual components and go through several cycles of analysis while adjusting for improving the routing and optimizing the performance. At this point, they may also find it necessary to reconsider placement of components including changes in package sizes based on cost and sizing concerns. Experienced designers usually place components in a specific order such as:

Best Practices for Placement and Routing

Although the design process may vary from design to design, designers follow some best practices for component placement. Some of them are:

After the designer has finished placing components, they will route the power, ground, and signal traces, in that order. Optimizing the routing is necessary to obtain a clean and clear travel path for the traces free of obstacles and interference. Designers prioritize routing based on power levels, susceptibility to noise, while considering manufacturing capabilities. Designers also follow routing best practices, some of which are listed below:

Designers pay special attention to thermal management, as improper heat management will often degrade and damage a PCB. They usually consult the ratings for thermal resistance for a component, thereby determining the components likely to dissipate the most heat. They will typically place critical and sensitive components at adequate distances from high heat generation components.

Designers use various techniques to handle thermal management. For instance, they will use thermal reliefs for TH components, and thermal relief patterns for holes and vias associated with ground or power planes. For reducing thermal and mechanical stress on pads and traces, designers add teardrops as added metal/copper support. 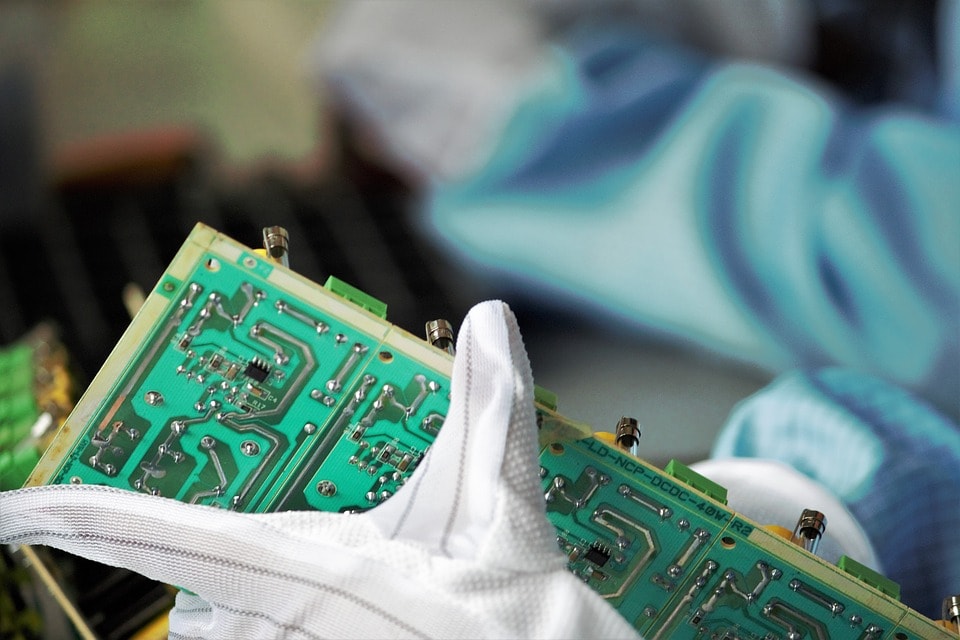 The solder mask designers place on the board exposes only the solderable parts of the copper traces. Without the solder mask, molten solder will flow down the trace covering as much as it possibly can cover. As the printer allows only a limited quantity of solder paste on each pad, in the event of solder flowing down the trace, not much of it may be available to anchor an SMT component properly to the pad. Additionally, the flowing molten solder may pull the component off the pad and skew their position. In fact, the force may be large enough to twist the component so much the other end comes off its pad altogether.

Designers counter this by careful design of traces leaving the pad. Typically, they allow the traces to leave the pads either directly inwards or outwards. The pulling forces of the molten solder then act in opposite directions, thereby canceling each other. In case it is not possible to make the traces leave the pad in the inward or outward directions, designers tend to have them leave the pad in the same direction. This allows the pull on the component to also be in the same direction, making it less likely for the component to face a torque-like situation that can pull one end off a pad.

It is customary for designers to place high pin count devices such that the row of pins is perpendicular to the flow of the solder wave. That means all the pins enter the molten solder at the same time and all of them leave the molten solder at the same time, reducing the chances of bridging. However, such placement is not always possible, and in parallel positioning, the leads enter the solder one at a time, and this pulls the wave from one lead to the next, increasing the chances of bridging between neighboring leads, especially the last two of them.

Making the last pad somewhat larger than the others are, helps to wick the excess solder off the last lead, pulling it away from its neighboring lead, and reducing the chances of solder bridging between the two. To make this scheme successful, however, the designer must consult his/her assembly partner as to the efficacy of the thieving pad.

Also Read: Flex PCBs and the Internet of Things (IOT)

With increasing automation in the PCB industry, it is essential engineers and designers follow DFM rules for component placement. This also requires the board to have at least two parallel edges for the machines to grip the board properly during assembly. For irregular board shapes, fabricators leave the board connected to the rectangular panel. To reduce assembly time when assembling small boards, fabricators may have multiple boards in one panel, with perforations or V-grooves in between to help separate them after the assembly is over.

This requires designers to be careful to not place components in the areas where the machine will grip the board, and near the perforations or V-grooves where the boards will break apart.

Using automated tools for component placement such as pick-and-place machines requires the operator to program the machine with some reference point on the PCB. These references usually take the form of tooling holes in extreme ends of the PCB in the X and Y directions, along with a hole near the origin.

Designers include the tooling holes when they begin their design, and it appears on all the Gerber files, thereby allowing the fabricator to properly align all the layers when fabricating the PCB. Designers need to be careful to not place any component within a certain radius of the tooling holes.

Another PCB feature that assemblers often need is the fiducial mark, especially for mounting large ICs with fine-pitch pins such as BGA packages. The pick-and-place machines take reference from the fiducial marks to position the IC accurately on the board.

Proper component placements can distinguish a professional board from others. This can also be a measure for the reliability the board can deliver. Although there is no single method of placement that will work for every design every time, knowing the various tools designers use and their different methodologies helps in boosting the yield, increasing repeatability, decreasing costs, and creating an efficient design. Using the above methods can help in producing higher quality of circuit boards.